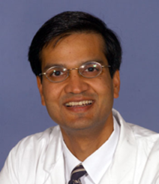 Manoj Jain, MD MPH is an infectious disease physician, a writer, an international leader in healthcare quality improvement and a philanthropist.

Dr. Jain is a founder and president of infectious disease practice, Mid-south Infectious Disease Associates, with ten providers who care for the infectious disease needs of over twenty-five percent of patient-load in the Memphis metropolitan area. Dr. Jain is Board-certified in infectious diseases actively practicing in-person and on telemedicine in the mid-south at Baptist Memorial Hospitals and Methodist Hospitals.  He is also a clinical Associate Professor at University of Tennessee, Memphis and Rollins School of Public Health at Emory University in Atlanta where he teaches a graduate level class on “Physician Performance.” During the pandemic, Dr. Jain serves as the medical lead and advisor for the Memphis and Shelby County Covid-19 Taskforce and has been dubbed as “Dr. Fauci of Memphis” by the city Mayor.

Dr. Jain received his engineering, doctorate, and public health degree from Boston University. He did his residency, fellow and executive public health training at Boston City Hospital, New England Medical Center, Tufts University and Harvard School of Public Health, respectively. He has served as a consultant to the World Bank on HIV, World Health Organization on tuberculosis, and has been interviewed by CNN and National Public Radio’s  Talk of the Nation. Dr. Jain has published numerous scientific articles, chapters and books and has conducted research on HIV epidemiology, quality improvement, and spirituality & meditation.

As a writer Dr. Jain has published over 22 columns for the Washington Post, over 250 for the Commercial Appeal and Tennessean, now USA Today-TN, and over 30 for Times of India, His writings and letters have appeared in the  New York Times, Indian Express, and Time magazine. Dr. Jain has authored three cookbooks on vegetarian and Indian cooking, one of which was co-authored with famous chef, Tarla Dalal. On the topic of mindfulness Dr. Jain conducts workshops and has developed guide books on meditation. He has collaborated with Surgeon General Vivek Murthy, Congressman Tim Ryan and mindfulness expert  John Kabet-Zinn.

As a leader in quality improvement Dr. Jain has been the director of Medicare’s Quality Improvement Program at QSource for 15 years covering the state of Tennessee, Mississippi and Arkansas. Dr. Jain is a faculty at Institute for Healthcare Improvement and has co-authored a paper with its founder Dr. Donald Berwick. At present, Dr. Jain has a USAID funded grant to teach the principles of quality improvement and PDSA – Plan-Do-Study-Act to the District Tuberculosis Officers across India. He has developed an e-PDSA tool (electronic PDSA) which facilitates rapid cycle improvement.

Dr. Jain is a philanthropist and a socially and politically concerned activist. He is the founder and chairman of the Gandhi-King Conference, which for over 20 years has convened like minded individuals in the South to act for the cause of nonviolence. The conference has attracted speakers such as  the Late John Lewis and Maya Sortoro Ng. In collaboration with the National Civil Rights Museum, Dr. Jain has been part of a team to place a Gandhi statue at the museum and rename a local street near the museum as “Gandhi Way.” With the dream to end TB in his ancestral hometown of Indore, Madhya Pradesh, Dr. Jain founded CETI, a collaboration which has expanded to all of India. CETI is a non-profit with grants from  (AAPI) American Association of Physicians of Indian Origin, Johnson and Johnson, USAID and The UNION.

Dr. Jain is married to Dr. Sunita Jain, a physical and rehabilitation physician in the mid-south, and they have three children pursuing careers in law, medicine and engineering.